Artists dismayed at the cuts to the art infrastructures, force the issue's importance to the forefront, by publicly destroying their own art. 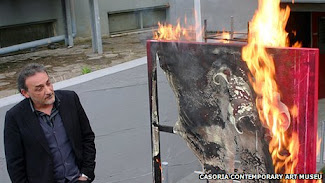 Italian Museum declares it will burn three paintings each week in an ongoing protest.

Welsh artist, burns one of his works, to send the same message.

An Italian museum is starting an art war, pledging to burn three painting a weeks in protest of government austerity cuts (via @gabpreda).

The Casoria Contemporary Art Museum near Naples, Italy, torched its first painting by Severine Bourguignon on Tuesday, according to AFP.

The museum said it will ultimately burn over 1,000 works of art unless the government takes notice and halts austerity cuts that have sapped the funding of many cultural institutions.

"Our 1,000 artworks are headed for destruction anyway because of the indifference of the government," museum director Antonio Manfredi told reporters.

The artist supported the protest and watched it on Skype.

CAM Casoria and Bourguignon are not the only artists joining in these protests. Welsh sculptor John Brown also torched on of his works on Monday, according to the BBC.