A pinhole camera portrait of the artist is hung with a video projection that uses quantum* mathematical concepts & equations to scatter the image into the imagined state beyond death, where all thought & intention still exist as "scattered atoms*".  Based on the artists’ exploration of philosophies and theologies of eschatology, or the study of life beyond death,   Scattered Atoms embraces the scientific theory that the animate energy of the human soul/spirit may utilize the phenomenon of Quantum Tunneling to escape the confines of the physical body upon death. Once freed from the body the person’s spirit lives on in the Quantum Field, as ‘scattered atoms’, as eternal life. 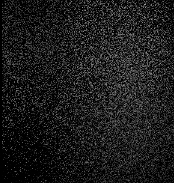 Time Independent Schrödinger Equation (TISE)
The equation for a one dimensional quantum mechanical system.  This is something like Newton's F=ma (Force equals mass times acceleration) except for a quantum mechanical system. It is time independent because it can be used to study systems whose quantum state doesn't change.   Many real world quantum systems are adequately described by this equation and even at this stage, the equation can be solved in systems that reveal the phenomenon of quantum tunneling.