'Mustard Seed' addresses success and failure, of striving to grow, of new life and of death. It references christian parables on the nature of spilling forth. It speaks to the Quantum realm of existence & addresses my fascination with the power of intention, and how our thoughts become manifest in the world... Every action carries a consequence. Every moment seeds the next moment. The arm appears lifeless. Who lifts the arm?"

'Bill's Seed' is inspired by the Bill Reid carving in the Rotunda at the Museum of Anthropology, which tells part of the Haida peoples human creation myth. If you look carefully you can see the form of First Man emerging upside down from a shell, and his hand reaching up to steady himself as her pulls himself out. Disintegration and struggle have already set in, even from this moment of the 'birth' of a species. Tree seeds cut through the body of this first human and of the shell, as the cycle of human life, death and rebirth begins."
VIDEO Single Channel, Interactive software (Isadora)

The seeds of a large old Pine tree fall eternally onto concrete at the University of British Columbia. Unable to germinate, they return to the sky, floating back upwards, returning to their source.

The seeds of a large old Pine tree are held inside a glass aquarium in the gallery window. Unable to germinate. Contained for viewing. 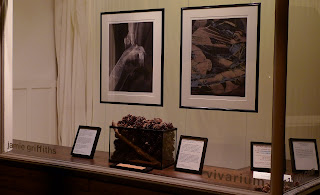