I received a group email on the topic this morning. Plus wonderful insight from Noam Chomsky, as always, on the role of team sports in modern society. 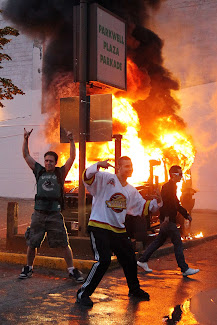 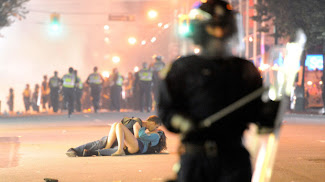 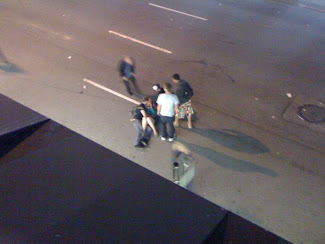 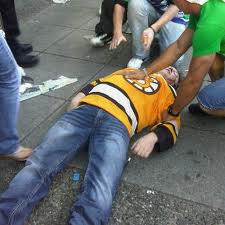 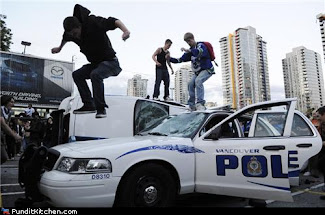 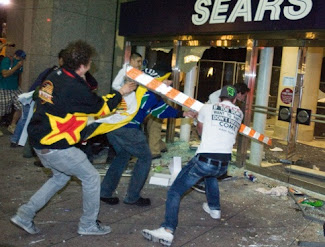 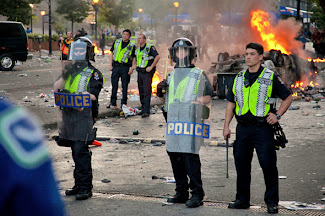 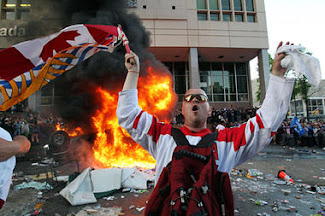 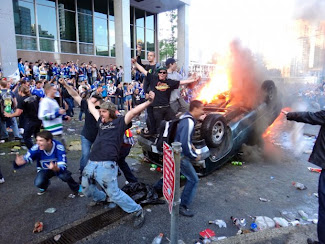 The riot was the ultimate expression of Sports Tribalism and its inherent violence taken to its logical conclusion. "We'll do it because we can, because we want to, and because you can't stop us, even if we lose the game...we will win!"

We live in a corporatized profit-driven culture that has moulded the minds of our youth, and now they want the goods. If they can't have them, they will simply take them... and wear big smiles while they have fun doing it, and take out a few of their 'enemies' along the way (ie Bruins fans, other people's expensive cars and the police).

First message that arrived from a colleague: "I am and deeply embarrassed to be a Vancouver citizen tonight. I hope all the rioters are prosecuted and spend time in jail and lose all that is dear to them. Damm you all and I hope you feel pain in the moments before you die. You have shamed a great city."

Second Message in reply to the above:  "Well said!! Couldn't agree more !! This was triggered, more than likely, by a small minority of moronic,lowlife,born antagonizers, belligerant dispecable amoral jerks, probably not even from Vancouver. Can someone explain t!..... (some hockey statistics here that I am leaving out) And I'll bet it will take a mere few hours for our media types to slant this entire thing towards...what else, ? of course, police brutality !!!"

FYI from jamie: The police handled it very well. The BC Civil Liberties Association released a statement this morning praising the containment that was gradual and which succeeded in de-escalating a dangerous out-of-control situation on the streets. Amazing that no buildings burned, and no deaths occurred.

My Reply: "this online blog shows (the rioters) mindset... I don't support it! But it is interesting reading http://vancouver.mediacoop.ca/story/riot-smashing-spectacle-report-back-downtown-fire/7495 The blogger even includes a story within it of a violent hockey group encircling and taunting a small number of black-bloc anarchists, who were not at the core of this riot. It was thugs, hockey thugs, thieves, opportunists, and ignorant young people that hate authority. The sad thing is that our culture no longer teaches community. This is the result. We live in the cult of the individual and of celebrity and entitlement. Not of compassion, community and humility. Young people think the world is theirs to burn and trash, cos that is what they learn on TV and in video games and in violent sports tribalism.
There will be many stories and discussions and accusations. But its not as simple as we'd like to think. To just blame 'outsiders', pretend they are not from Vancouver, not hockey fans, and that this riot is an anomaly alien to 'our' world, is a deflection of taking responsibility for the world we live in, which is the root of its ills. We are all to blame. We can all change the world we live in. That's what the clean-up-volunteers are saying by going downtown to clean up the mess. Blaming the riot on a 'small minority' of 'outsiders' is delusional, in my opinion... but since we are sharing opinions, I am throwing in my two cents worth."

Fourth Message: Another on the group email sent a link to watch this clip (below) by Noam Chomsky on "The role of sports in propaganda-based authority"

Fifth Message: "Saddened indeed.However, I would not lay responsibility for this in the hands of young people. This is a societal ill, not simply the scourge of youth!"

Jamie : Our ill western society is ruled by profits, commerce and individualism. It is capitalism run rampant. It is advertising manipulating the minds of the young. Its is SALES, SALES and more SALES at the cost of a sane and humane society. It is a city full of young people who do not see their lives fulfilled, since they do not seem able to live up to the dream they see on their TV sets. Where is my BMW? Where is my Louis Vuitton bag? etc etc.. and on and on... and for their team to lose, it was just an excuse based on prior historical events (the riot of 1994) that allowed them to rip up the streets and act out their rebellion and disdain for authority with glee. Numb people, with nothing better to do than get tribal at a hockey game. And we think Rwandan atrocities can't happen here? It can happen anywhere that tribalistic violent thinking is fostered and encouraged, as it is in hockey

Had to get that off my chest.

Oh, and here is a link to a guerilla conceptual art performance at the 2010 Olympics on this theme, by Emilio Rojas and Patrick Blaeser, that pokes intelligently at the eroticism of hockey tribalism.  There is a 15 minute three channel video installation of this work. Contact Emilio to book it for your gallery!