Water to Bone (Beginning of improvisation performance) from jamie griffiths on Vimeo.

Water to Bone (excerpt) from jamie griffiths on Vimeo.

Faris Theatre, Scotiabank Dance Centre, Vancouver, BC
'Theatre for the Ears' Festival
Vancouver New Music's three day audio-vizualization smorgasbord, 'Theatre for the Ears' explores intersections of sound and image with a festival of visual music, abstract cinema, experimental animation, lumia, cymatics and interactive live audiovisual performance.
Seeking to link the seemingly disparate phenomena of sight and sound, artists have been researching and experimenting to implement musical structures in visual imagery and to explore methods or devices which can translate sounds or music into a related visual presentation.

History
jamie & Viviane first collaborated in 2007 in a live performance collaboration, 'Gesture4', along with Stefan Smulovitz (elctro-acoustic & viola) and Noam Gagnon (dance). On a strict budget intended only for exploration, they spent only 22 hours rehearsal time, before performing two 60 minute shows; an improvisation on the theme of 'gesture' in music, poetry, spirituality and the body. The work impressed the organisers of the international Festival Actuelle in Montreal & they were invited to perform the work there in 2008.
Since that time, jamie has continued to devise her own works, but has kept in close contact with Stefan, Viviane & Noam working towards the goal of new improvisation collaborations together.
'Water to Bone' focuses on the vocal-visual connection. Developing their creative concept & working with new performance technology for this intimate duet with Viviane on the theme of Catastrophic Change, has allowed jamie to spend more time programming with the voice, and allowed precious time to innovate and experiment further with some initial ideas spawned in 'Gesture4'.
Conceptual Notes
Weaving, tangling and un-knotting provide visual metaphors of the experience of personal catastrophic change, combined with imagery of the every day machinations of tensions of the mind at home; sharp objects, food as flesh, the body as doubt & confusion.  A visio-sonic duet that enters into the experience of unexpected catastrophic change, and the issues that it can bring into a person's life; deep shock, paralysis, despair... hope, determination... (small life altering moments that may lead to revelation, release & perhaps, recovery.

Audio: Papillon software (Max/Msp) by Stefan Smulovitz (link), iPad, OSC mapping.
Papillon processes the voice using three delays & granular synthesis. The parameters are manipulated using an iPad allowing the vocalist to focus on creating music and not on the technology. Sample playback of 16 sounds at a time is also possible. 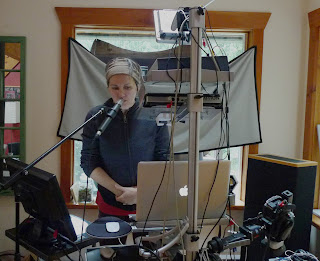 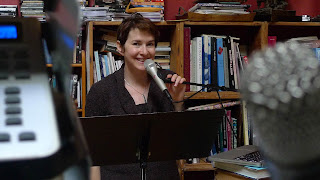