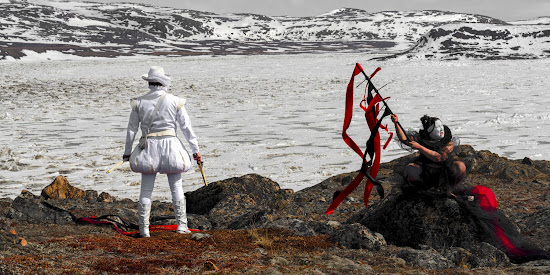 White Liar and the Known Shore: Frobisher and the Queen (2021)

Jamie Griffiths (Canada-UK) and Laakkuluk Williamson Bathory (Inuk) are collaborating artists, both based in Iqaluit, Nunavut. They were invited by Interdisciplinary Media Arts Association/Population of Noise (IMAPON) - Vancouver, BC,  to create a new work for a large scale banner that will spend the summer hung on the tennis court fence at McBride Park at 3350 4th Ave in Vancouver, British Columbia.

In this artwork, Laakkuluk and Jamie bring together many aspects of the colonial story of Iqaluit, challenging viewers to address the racism that perpetuates inequality for Inuit in their own homelands.

The photograph is taken on the northern shore of Niaqunnguup Kangiqtunga, an inlet to ‘Frobisher Bay' in Nunavut. Although the bay was named on colonial maps after the 16th century British Explorer, Captain Martin Frobisher, it has always had an Inuktitut name: Tasiujarjuaq ᑕᓯᐅᔭᕐᔪᐊᖅ, which means 'shaped like a large lake'.

Originally from the UK and a longtime resident of Vancouver, Jamie has created award-winning work that uses experimental tools and custom digital environments, digging into humanity's failings and triumphs, through autobiographical transparency and deliberate cultural confrontations.

Jamie and Laakkuluk’s recent works include a collaborative film installation called Silaup Putunga (2019), acquired by the Art Gallery of Ontario for their permanent collection, and Ikumagialiit, a performance art show quartet with Cris Derksen and Christine Tootoo, commissioned by the National Gallery of Canada to premiere at the international Indigenous art exhibition Abadakone (2019). Auk (2021), a short film, is currently in the works for the National Arts Centre of Canada.

Iqaluit is the capital city of Nunavut, Canada’s newest territory, created by the land claims agreement negotiated between Inuit and the Canadian federal government in 1993. Iqaluit is located in Koojesse Inlet, a part of Inuit homelands, since time immemorial. The colonial settlement began as an American army base in WWII, growing during the Cold War into a townsite, named Frobisher Bay.

Sir Martin Frobisher, a 16th Century English explorer, made three voyages to the area seeking the Northwest Passage (between Europe and Asia) and to establish an English colony in the Arctic, while also aiming to enrich his Queen’s coffers (and his own) with gold. Elizabeth 1, Queen of England, commissioned Frobisher’s endeavors and named the south Baffin Island he brought his fleets to ‘Meta Incognita’ (The Unknown Shore). Meta Incognita, (paired with the colonial concept of Terra Nullius and the Doctrine of Discovery), provided Elizabethan explorers with a ‘moral’ justification for settling new 'unoccupied' lands and can still be found on modern maps, alongside Inuktitut toponymy.

Frobisher’s expeditions failed in all aspects. The Northwest Passage remained elusive. Plans for a new land settlement were abandoned due to loss of ships with essential supplies, and the deaths of seamen and carpenters. On his last trip, Frobisher brought 1350 tons of rock back to England that he believed to be gold. It turned out to be worthless horneblend - “fool’s gold.” Frobisher abducted three Inuit from the Qikiqtani region and brought them to Bristol in 1577 - Kalicho, Arnaq and her child, Nutaaq. They all died soon after arriving in England.

Although Iqaluit returned to its original Inuktitut place name in 1987 and the only remnants of the American Distant Early Warning site is a condemned barracks, the city itself is still a colonial epicentre in Inuit homelands, full of contradiction and paradox. The annual average income for Inuit is $22,000, with non-Inuit incomes averaging $110,000. While Inuit are supposed to be hired at representative percentages at all levels of government, most Inuit who are employed remain at the lower rungs of authority. While Inuktitut is an official language of Nunavut, it is rare to find children speaking Inuktitut in Iqaluit’s playgrounds. Many Inuit have lived in substandard, inadequate and overcrowded Euro-Canadian housing since the time of colonization and yet empty housing units are commonly set aside for unfilled government jobs and transient workers from the south. Inuit have been forced into a position of poverty in their own homeland.

This work is licensed under a Creative Commons Attribution-NonCommercial-NoDerivatives 4.0 International License.

White Liar and the Known Shore: Frobisher and the Queen brings together many aspects of the colonial story of Iqaluit. The photograph is taken on the northern shore of Niaqunnguup Kangiqtunga, an inlet to ‘Frobisher Bay.’ The late spring sea ice is seen in a state of decay, melting a month earlier than usual.

Jamie has taken on the character of Frobisher dressed in white, to symbolize a White Liar. A repeated theme in Jamie's works, the White Liar functions to expose the fallacies that those in power use in order to stay in power, using historical White Liars as characters to unveil the mechanics of racism. Frobisher carries the (phallic) tusk of an ‘unknown’ creature that he gifted to the Queen, birthing the myth of the unicorn. It is, in fact, a narwhal tusk - from a much cherished animal that Inuit have always hunted and eaten.

Laakkuluk is interpreting Queen Elizabeth 1. She is in White Face, simultaneously mimicking the make-up Elizabeth was famous for, and harkening to whitened bones - an Inuit symbol of respect for ancestors. The black and red flagstaff use the colours of uaajeerneq. Black is a symbol of the humility humans must strive for because of the unknowable immensity of the universe. Red is a symbol of a vulva - usurping the power Elizabeth held as “Virgin Queen.”

An original ‘fool’s gold’ rock, that sailed on Frobisher's ships to England, lies at Laakkuluk’s left foot. It was returned to Iqaluit by Bristol-based artists Angela Piccini and Kayle Brandon and given to Janet Brewster (artist and Iqaluit’s deputy mayor). Loaned to the artists for this artwork. 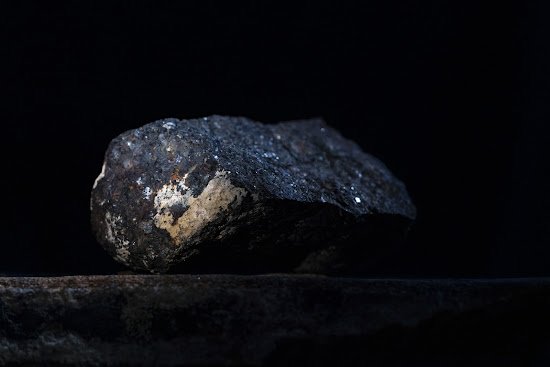 White Liar and the Known Shore: Frobisher and the Queen (2021) examines historical events and aesthetics, challenging contemporary viewers to examine their own place in Arctic colonization. It asks white people and other non-Inuit in Iqaluit, what role they play in the ongoing industry of colonization that exists. Do you know where you are? What is your function in this city? What are you afraid of? How do you address racism within yourself and allow for Inuit decolonization in Iqaluit and Nunavut?

Elizabethan painting of Arnaq and her baby Nutaak, on arrival in Bristol as slaves of Frobisher. 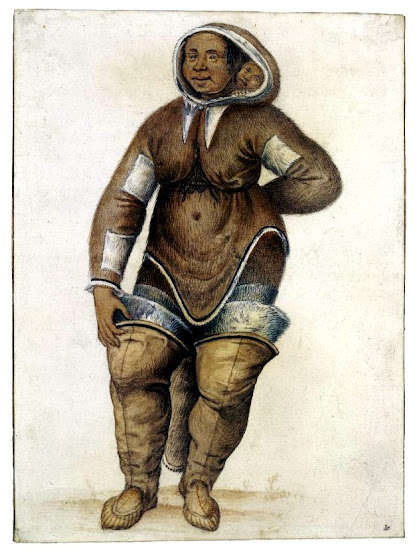 This webpage is photographically tracking any instances of graffiti that appear on the banner during its summer hang at McBride Park.