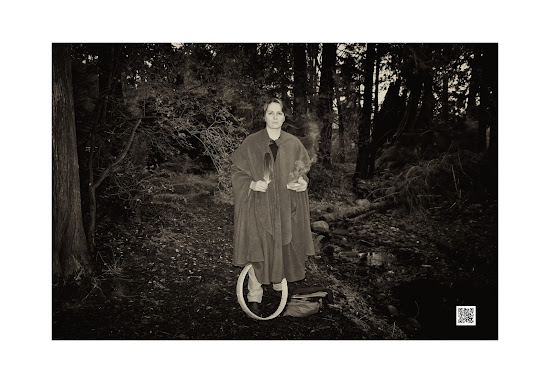 An ‘antique’ photograph of the artist, standing in a Canadian forest holding sacred paraphernalia; an eagle feather and a shell with burning sage. An empty drum ring leans against her leg, beside which sits a medicine bundle containing unknown items wrapped in cotton on top of a cloth bag.
‘White Lies’ references the missing details of captured photographic moments, the missing aboriginal histories of Canadian landscapes, and the role of contemporary emigration to Canada in ongoing damage to First Nations communities and traditional territories.

At the bottom of the photograph is a QR Code. When read with a smartphone app, the code takes the viewer to a webpage video of the same moment, revealing the sounds of visiting families and the drone of a seaplane passing overhead. In the background a father is heard asking his child in Tagalog if she has had enough of the park yet? The location is Vancouver’s popular Stanley Park named in honour of the British colonialist Lord Stanley. The 400 acre peninsula’s aboriginal name was Xwayxway, the ancestral home for 3000 years of a large, territorially important band of the Squamish tribal nation. First Nations peoples used the peninsula as a home, a resource for food, building materials, artworks, medicine and spiritual ceremonies.

The stream in the photograph is artificial; an idealized landscape, a failed salmon spawning project undertaken by the Vancouver Parks Board in an attempt to lure salmon back to the park’s small tributaries. It is located 100ft away from a disused bear pit, a remnant of a Victorian-era outdoor zoo, where polar bears were kept on display until the 1980’s. The modernized Vancouver Aquarium for marine mammals, fish and invertebrates still remains to the rear of the site and is a popular tourist attraction.

There is no memorial in the park to the communities that were forcibly removed for the park’s civic inauguration in 1887. The presence of ancient burial sites and large villages has been downplayed in order to promote the park as virgin primordial forest. The devotion that Vancouverites feel for their ‘pristine wilderness park’ reflects a widespread Canadian nostalgia for the country’s pre-colonial aboriginal past; a nostalgia that conveniently ignores the social, cultural and ecological realities of Canada’s First Nations.

As a further reflection upon timeless issues around economic privilege, only smartphone users are able to access the second part of ‘White Lies’ while standing in front of the photograph, although non-smartphone users are invited to visit the url later on a computer of their own choice.

The artist returned to live in the UK in 2012, after living in Canada for 23 years. ‘White Lies’ is part of an ongoing series of works exploring neo-colonialism.