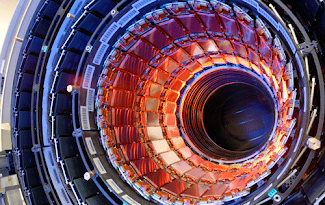 "In spite of these striking media images, the world’s most international research project, involving several nations, hundreds of institutes and thousands of scientists, has a communications problem. CERN needs to justify the major funding it receives from the participating states and to inform the public of its findings. Obviously, quantum physics is not something people casually discuss over a beer. But even the scientists at CERN now have trouble presenting and explaining their work because the object of their exper­iments has long since overreached their own powers of imagination. How does one portray the fourth dimension or anti-matter, if not in the guise of mathematical formulas?"