Museum of Anthropology, Vancouver BC
Site specific performance piece by jamie griffiths.
jamie griffiths - phototherapy and representation of the body 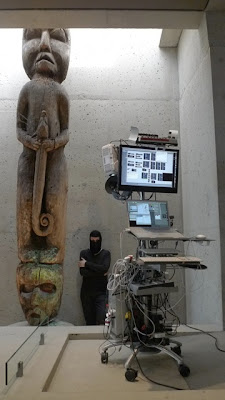 Opening Night Installation "IVY & me"
With the topics of self, ego and identity very much at the forefront of this work the name I.V.Y. (interactive virtual you) refers to the rolling technology trolley that jamie constructed for the 3 day event. She titles herself as 'me', creating a nomenclature of separation between herself and the technology that she is using for the performance. Jamie wore all black with a thin black silk balaclava over her head to mask her own physical identity, further calling into question the notion of self-hood and the role of externalized technology in modern-day identity.

The evening began at 6.30pm with jamie and her media art cart (aka 'IVY & me'). With live drawing software, jamie began to engage in forced interactions with members of the public arriving down the ramp into the Great Hall. Jamie drew lines across the ramp in attempt to slow their progression towards her, and boxes and oval shapes for them to step into. Video 'flowers' were strewn at their feet, causing them to stop and look, interact physically with the drawings and decipher where they were coming from. Intermittently she would turn her attention to the museum artifacts, drawing ivy and leaves upwards from the base of a totem pole, allowing the natural world to reclaim a small piece of the cultural artifact in that moment.
At 7pm, Jill Baird officially welcomed the public to the museum. Thanks were said to the First Nations, and the performance began shortly afterwards on the crossroads between the entry ramp and the Great Hall.

Jamie's performance was commissioned by MOA to accompany her artist talk on 'Therapeutic Interpretive Biographies'; a hybridized artistic version of photographic art therapy.
As part of the creative process for building her performance, jamie had sent out a questionnaire, two weeks prior to the event, asking friends, family and colleagues to answer six simple questions about her, using an anonymous online questionnaire. From their answers she constructed an 18 minute soundtrack. Jamie used her own voice to record their words which were interwoven with a previously improvised music score by Viviane Houle and Stefan Smulovitz; a previous interdisciplinary collaboration called Gesture4.
Jamie led the audience through an intimate performance of "self-imposed art therapy", using the technology onboard I.V.Y.
With the topics of self, ego and identity very much at the forefront of this work the name I.V.Y. (interactive virtual you) refers to the rolling technology trolley that jamie constructed for the 3 day event. She titles herself as 'me', creating a nomenclature of separation between herself and the technology that she is using for the performance. Jamie wore all black with a thin black silk balaclava over her head to mask her own physical identity, further calling into question the notion of self-hood and the role of externalized technology in modern-day identity.

She tried to fit herself inside objects that she drew onto the floor. She then relocated the video using a hand-held Wii remote to an upright screen, and began to use a small digital stills camera to reveal aspects of her physical past by uncovering and recovering old photos lying in a tray covered up by mustard seeds. In this way she addressed the concept of physical and emotional identity changing over time.

Jamie switched to the present moment using scissors to cut away at her costume to reveal parts of the body to photograph, her feet and toes, a tattoo hidden up a sleeve, making sensual abstract photographic shapes by using slow shutter speeds and creating distortions of her hands and the soles of her feet.

Putting the focus back onto the earlier photographs from her past, she returned to using live drawing to aggressively deface and re-frame the photographs, drawing red and white painted shapes and lines, bringing up questions about regret, memories, emotional reactions to the self, or simply the process of self-examination and the need to 'redraw' one's identity from time to time as an essential part of the path of conscious growth as a human being.

At the end of the performance in the soundtrack we return to the present, with words of gentle encouragement ringing out clearly and cleanly, as jamie steps into a (video)pool of water that she positions onto the floor in front of the screen. The shallow waves wash over her feet. She watches her feet, becoming part of a bigger ocean and relaxes down into its rhythm. The physical mask (the balaclava) is removed.

Post-Performance Artist Talk and Lecture Presentation
After the performance jamie presented her artist talk on Therapeutic Interpretive Biographies, and her creative process using photography as a collaborative artistic process, referencing in particular her collaborative work with Mikela J. Michael (intersex), Arianne Hannah (survivor of abuse) and painter Joe Average (long-term survivor of AIDS).
Jamie's talk was followed by a talk by Anthony Shelton on 'The Fetishized Body', from a historical and cross-cultural perspective. The post-discussion provocateur/moderator was Heidi Reitmaier of the Vancouver Art Gallery. 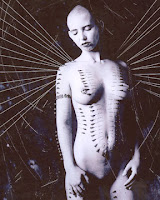 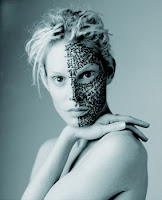 Closing night March 20th 2010
jamie continued her site specific installation with an interactive video design to compliment the artist talks by Nondumiso Hlewle and Martha Carter. A video camera watching the space, allowed the public to paint the floor with imagery generated by and of their own bodies. Integrated with that was a 'Body Map' outline using live drawing software.

An interactive video installation by jamie griffiths at the InBody Global Artist Dialogue at the Museum of Anhtropology, Vancouver BC, March 2010.