Post-Show Thoughts on 'I.V.Y. AND ME'

The TECHNOLOGY CART was named by the other artists at the InBody event at MOA.  ‘Interactive Virtual You” a.k.a.  I.V.Y.  Therefore the performance became known as ‘I.V.Y. AND ME’

Computerized toys today, are often given names and can be described as “relational artifacts”.
IS I.V.Y.  A RELATIONAL ARTIFACT?
Is she a pseudo-robot? 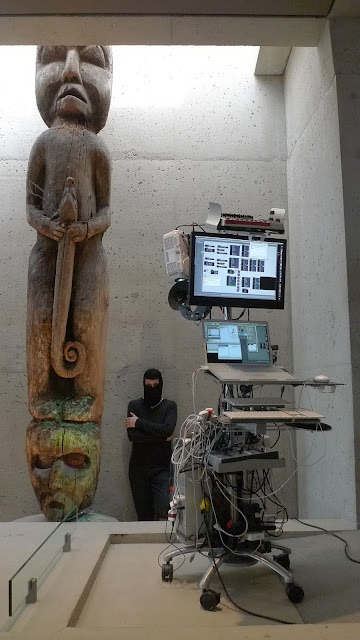 The notes in bold type are my own thoughts.
The notes in italics below are paraphrased from

Sherry Turkle's ‘The Second Self: Computers and the Human Spirit’


People feel attachment and loss.
A programmed computer does not have free will.  A human beings thought processes do have free will (?)

What is different about how computers think and how humans think?
People tend to perceive a ‘machine that thinks’ as a ‘machine WHO thinks’.
Children see animism in everything, but it can be a friendly experience or a scary one. They are disturbed when a computer behaves halfway between a machine and a person.
When a machine seems to show any degree of ‘intelligence’, people easily move into anthropomorphizing them.

Airplanes fly. Cars drive. Paint brushes paint.
A computer... computes?
There are two apparent levels to the computer.. the local simplicity of its individual acts (of the bits), and the global complexity that emerges when it ‘runs’.
Thinking about the core of the machine as the exercise of logic brings us back to thinking of the computer as mind.


Mirrors allow us to see an aspect of ourself that we can only normally feel within.
IVY allows me to objectify inner aspects of myself and to see them on the outside of me instead of on the inside only?

Society programs us to behave in certain ways... ethics, belief systems, clothing styles, etc etc  What do I need to do to deprogram myself?

People used to understand more about how things work. We now live in a world where we don’t understand how most things work... the economy... our TV’s... microwaves.... computers... they lack transparency...  You can relate to a computer by accepting it’s ‘magical powers’ or by striving to understand how it works... to have its functioning become transparent.. to know how it works.
Are computers alive?
What is Life?
What makes us special?
What is machine intelligence?
Descartes “Cogito ergo sum” I think therefore I am
Computers can shuffle data, but without actually understanding it, only by applying rules to it.

People that like computers are ugly, nerds... ( a stereotype)
Hackers are outsiders.. drifting away from academia, away from acceptance of hierarchy and away from a ‘day life’....
Computers can support growth and development or entrapment and addictive behavior.
The sensual goes beyond the overtly sexual. there is sensuality in music, literature, art and there are sensual relationships with the world of things... a musician touches the instrument, caresses its shape, its tonality, its touch which can be pleasing and exciting.
But the prototypical hacker tends only towards intellectual contact with the computer.


This is why I so strongly desire a better hand held performance tool.  Computers are anti-sensual, anti-touch, anti-visceral.


Human love, sensuality, emotion...
Computers lack consciousness, originality and intention.
Computers are programmed, people aren’t (?)
“Computers only do what you tell them to do”
Computers are analytical machines, but also evocative objects.
Computers can be companions without emotional demands. You can be a loner but never alone. You can interact without feeling vulnerable

The Romantics looked for an alternative to the mechanism and competition of modern society, they looked to a perfect society of two, “perfect friendship” “perfect love”. Their desire for fusion has its echoes today although in a new and more troubling from. Instead of a quest for an ideal person, now there is a computer as a second self.
The computer offers a new expressive medium.
A schizoid compromise between loneliness and fear of intimacy are emblematic of the encounter between the machine and our emotional lives, and between computers and our philosophical lives, in particular our thinking about human nature.

Because computers stand on the line between mind and not-mind, between life and not-life, computers excite reflection about the nature of mind and the nature of life. They provoke us to think about who we are. They challenge our ideas about what it is to be human, to think and to feel. They present us with more than a challenge. They present us with an affront because they hold up a new mirror in which mind is reflected as machine.

Where is responsibility, spirit, soul? If I am a (part of) GOD, then I am not a machine...

We are distinguished from the machines by feelings, love affection, spiritual urges and sensual ones, by excitement and heroism, warmth and familiarity of domesticity

Machines are reason and people are sensuality and emotion? Is that too simplistic?
Plato described our two selves, reason and passion., the black and the white horse drawing the one carriage.