Spent a week with the lovely 'Islands and Rivers' artist group, teaching them interactive programming with Isadora software. 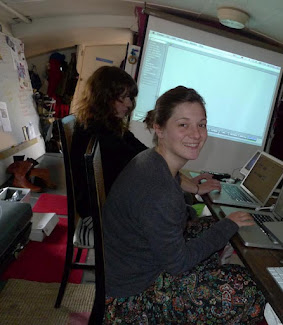 We had a very productive time and I got my sea-legs living on the 'Yogurt', their catamaran boat, used as a floating home and studio anchored on the River Thames at Battersea.

Here is one of their very famous video's of the sudden and dramatic arrival of a murmuration of starlings. (8 million hits on Vimeo so far). They have new works soon to be released.

Sophie and Liberty are independent filmmakers based in London creating work that ranges from the educational to the experimental. Their diverse body of work has included art department for feature films to making award winning short documentaries, from animation workshops to to interactive festival installations. They have previously collaborated with The House of Fairytales , Film London, October Films, Ideas Tap and many schools and museums.

They find inspiration from bike rides, being by water, making things and meeting people. www.islandsandrivers.co.uk/