NASA's Kepler mission has confirmed its first planet in the "habitable zone" of a distant sun-like star.

I hope that whatever inhabits it, lives with more humility than homo sapiens do... just saying... we need to work on ourselves... a lot..(from jamie) 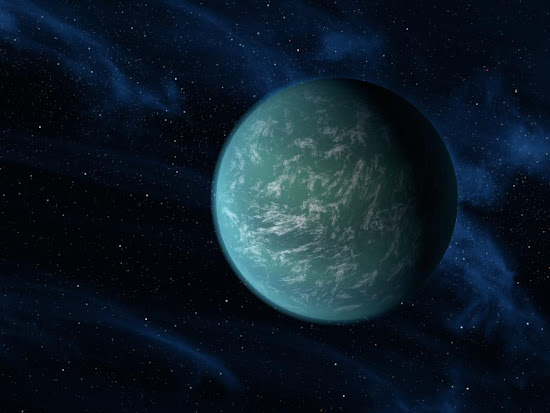 Excerpt below is from Nasa's Website article on Kepler 22-b

The newly confirmed planet, Kepler-22b, is about 2.4 times the radius of Earth. Scientists don't yet know if Kepler-22b has a predominantly rocky, gaseous or liquid composition, but its discovery is a step closer to finding Earth-like planets1.

The "habitable zone" of a planetary system refers to the band of orbits where liquid water could exist on a planet’s surface. Kepler has recently discovered more than 1,000 new planet candidates. Ten of these candidates are near-Earth-size and orbit in the habitable zone of their host star. Candidates require follow-up observations to verify they are actual planets.

"This is a major milestone on the road to finding Earth's twin," said Douglas Hudgins, Kepler program scientist at NASA Headquarters in Washington.

Kepler-22b is located 600 light-years away. While the planet is larger than Earth, its orbit of 290 days around a sun-like star resembles that of our world. The planet's host star belongs to the same class as our sun, called G-type, although it is slightly smaller and cooler.

Kepler discovers planets and planet candidates by measuring dips in the brightness of more than 150,000 stars to search for planets that cross in front, or "transit," the stars. Kepler requires at least three transits to verify a signal as a planet.

"Fortune smiled upon us with the detection of this planet," said William Borucki, Kepler principal investigator at NASA Ames Research Center at Moffett Field, Calif., who led the team that discovered Kepler-22b. "The first transit was captured just three days after we declared the spacecraft operationally ready. We witnessed the defining third transit over the 2010 holiday season."