An outline of the steps to connect a Kinect into Isadora on a Mac, using the Kineme plugin via Quartz Composer.

I'll outline the steps I have used successfully to use a Kinect camera in Isadora, using the Kineme plugin running in Quartz Composer to force the camera to talk to your Mac, and then the Quartz Composer patch as a plugin inside Isadora. It also reads the accelerometer data of the Kinect.   This method outlined below will not allow you to access a person's 'skeleton' data but will get you both the Kinect video streams: ie the RGB camera and the stereoscopic infra red depth mapped image into Isadora. If you want to use skeleton data, you should look at using OSCeleton instead. There is some info inthe Isadora forum on this already.

1) You need Quartz Composer software which is part of the downloadable XCode package from Apple. You can register for free as an Apple Developer to get the last-but-one version of XCode. If you want the most recent version you may have to pay a small fee instead. NB. XCode is a large .dmg that takes a while to download so allow some time for this first step.

Place the plugin file 'KinectTools.plugin' at this directory location:
/Users/[you]/Library/Graphics/Quartz Composer Patches/
(Create the folder if it doesn't already exist.) 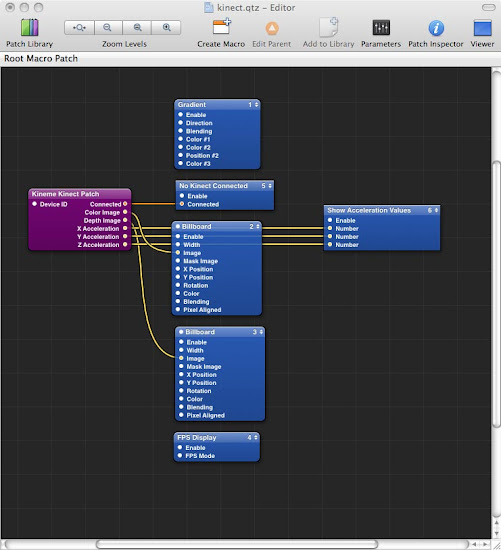 5) Delete all the blue objects and replace with sprites from the Quartz Composer object library. They drag and drop into the patch. Click on the 'Color Image' and 'Depth Image' outputs to grab a 'string' and connect them to the image inputs  on the Sprite objects, so it will now look like this... 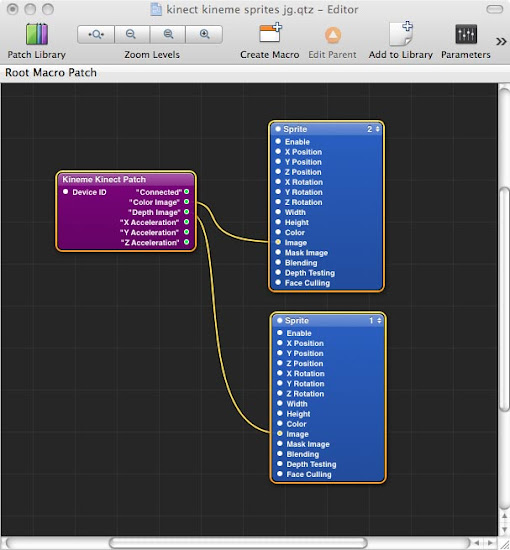 6) Once you have added the two sprite objects you can open a 'Viewer' window in Quartz and you should see something like this image.

7) Control-Click (Mac) on the Kineme object outputs (the white dots beside each parameter) in order to publish the outputs, as seen in the screen capture below. Select the parameter to publish from the publish output list that appears and a check mark will be added next to that parameter in the list. Once you have done that successfully the dot changes from white to green. Repeat this process for all the outputs that you wish to publish. 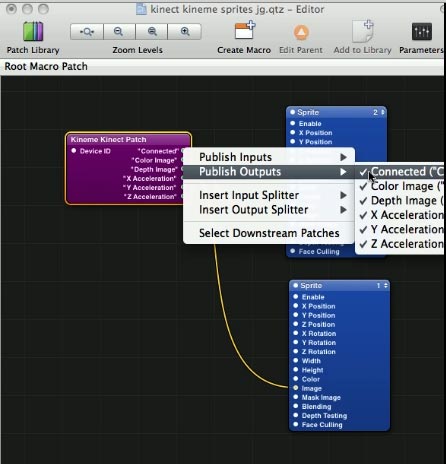 8) Save the file and quit Quartz Composer. NB You MUST quit Quartz before you boot up Isadora or Quartz will be hogging the Kinect video streams and you won't be able to receive them into Isadora.

9) Copy the new saved Quartz Composer file to the location where Isadora looks for Quartz Composer compositions when it boots up. Then it will become available to use as a 'QC kinect' actor in Isadora and you can add it to your Isadora patch. NB You need to have the optional Core Video upgrade version of Isadora for this to work.

10) Boot up Isadora and create a Broadcaster patch that looks like the image below. You are going to use this patch to receive the Kinect camera images  and broadcast them into a second Isadora patch,which I am calling a Listener patch. The reason you have to do this is that Isadora crashes when you jump scenes with the Kinect connected. However if you broadcast from one izzy patch that never jumps scenes, into a second patch where you can jump scenes, then it is reliable. Here are screen captures of the two patches. So you can now go ahead and add as many scenes as you need to in the Listener patch and jump scenes without any problems.

Alternatively you can have the QC Kinect actor in a scene in the same patch, and ensure that that scene is always active, rather than in a separate project patch. You would then still use the broadcast and listener actors to broadcast from the active kinect scene into other scenes. However if you accidentally deactivate the main kinect scene, the camera signal will crash, and you may also trigger an Isadora crash. 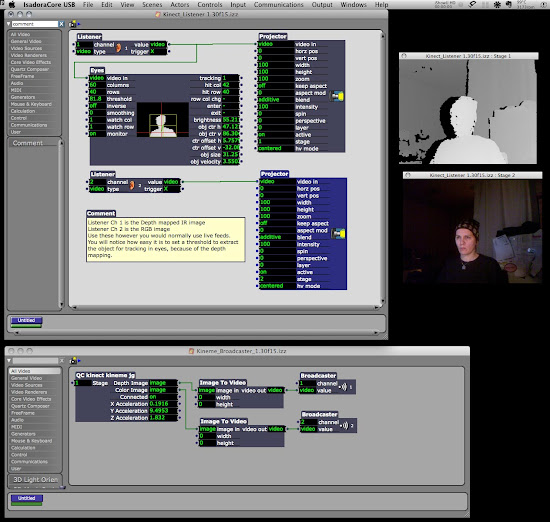 WHEN YOU START UP THE SYSTEM DO IT IN THIS ORDER!

Boot up the Quartz Composer patch to connect to the Kinect camera (Make sure you do not have Isadora running in the background when you do this).

Open the Isadora Broadcaster file and force it to draw something by opening the Stages (cmd-g) if you don't see any video or data streaming into the kineme actor yet.

ps.. i renamed my quartz file which is why it shows up in these screen captures with a different name. Your file from kineme will originally just be called kinect.qtz. Once it has been loaded by Isadora as a plugin it will be found in the Isadora tool box, labelled automatically as QC kinect (without the suffix)   If you decide to rename your qtz file, as I have, then it will show up with that new name and the prefix QC in your Isadora tool box.