Added functionality within KnotPlot software by Rob Scharein, allowing the location in 3D space and the unravelling of the nodes of a knot to control the triggering and playback of audio files directly from the drawing of the 3D knot visuals.

I find this exciting since in most of my performance work I have been creating visuals from sound.. or to accompany sound... not generating sound directly from the drawing of the visuals. In live visual performance, we use the term audio-visualization or visual music to describe the generation of visuals from sound, which is usually done through software algorithms or the mapping of sound triggers from volume and pitch to the delivery of image files or image processing effects.

So I suppose Orbita then could be called visio-audialization?

... but... is the mapping of audio files enough to call it that, or should the sound be generated directly from the visuals, and what does that mean exactly? Is there not ALWAYS mapping involved?

An interesting Link here on SOUND INTO IMAGE http://www.chestprint.com/iis/learn.php

Live Music Improvisation to Visuals.   Musicians (using any kinds of musical instruments or software) create a live music performance for a film or live visuals, responding to the visuals with their music.

Live Visual Improvisation to Music.   Abstract Cinema, Live Visuals or VJ'ing are where a visual artist (mostly using software, but not always eg video feedback artists, live drawing etc) creates a live visual performance for a musical composition or improvisation, responding to the music with the delivery of visuals.

ROB SCHAREIN & JAMIE GRIFFITHS are doing a live improvised Visio-Audialization performance on Dec 15 using this iteration of KnotPlot, which we are calling ORBITA. The performance is in Vancouver for composer STEFAN SMULOVITZ' 40th birthday.  Stefan may join in the improvisation with us, using his Max/Msp based software Kenaxis... so in that case we would be adding Live Music Improvisation to the Visuals, as well.

I will be using my wireless controller prototype developed this summer at STEIM where I began working with software/artist engineer Marije Baalman and her Sense/Stage technology.  Using OSC the instruments control are sent wirelessly to Isadora and from there to Orbita (running in KnotPlot).   However with even a little bit of rehearsal with Stefan we may add all kinds of additional interdisciplinary pathways! 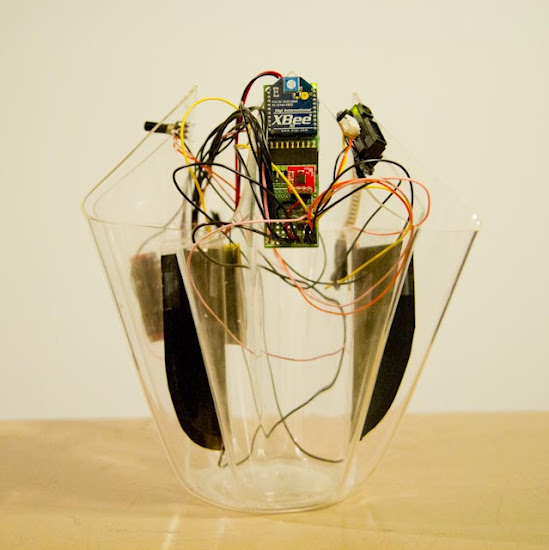