Stuckism is an international art movement that was founded in 1999 by Billy Childish and Charles Thomson to promote figurative painting in opposition to conceptual art. The first group of thirteen British artists has since expanded, as of May 2010, to 209 groups in 48 countries.
Pictured is 'Tins of Snuff' by Ella Guru. A painting of UK brat-rock-riot-grrl-punk musican Debbie Smith. We used to hang out in the 80's in London before I emigrated to Canada. I just love this painting! Anyone that knows Debbie will also get an inside chuckle and love this brilliant portrait of her. 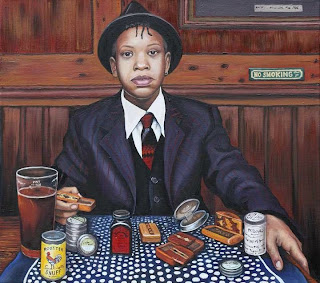 As an art movement, Stuckism has expanded rapidly. Although their original manifesto famously claimed that "anyone who doesn't paint isn't an artist"...  a closely allied offshoot group quickly emerged of Stuckist Photographers and the movement has more recently (since 2001) expanded into Stuckism film artists.

Jesse Richards said, "Remodernism rejected Postmodernism for its 'failure to answer or address any important issues of being a human being'", and that Remodernism is "about seeking truth, establishing meaningful connections" and "addressing the shadow".
In his essay Concepts and Craft in Remodernist Film, Richards said that Remodernist film craft "embraces the amateur", involves the idea of filmmakers "teaching themselves to paint pictures, to try acting in their own movies and those of others (especially if they are shy), to be nude models for other artists, to meditate, worship if they are religious, to do things that affect their levels of consciousness, try things that make them nervous or uncomfortable, to go out and be involved in life, to find adventure, to jump in the ocean. I think that is the exploration of craft".