Along with the new Adobe Suite 5.5 subscription 'option' comes the announcement this week of download ONLY Final Cut Pro X, which kills off all existing versions of Final Cut Pro, excluding it from retail outlets. 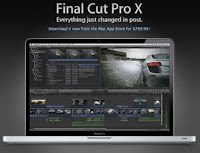 The price is $300 for Final Cut Pro X, but you have to buy Compressor 4 and Motion 5 as extras, at $50 each, so you'll be up to $400. NONE of the existing FCP Suite software versions of Color, Soundtrack, Motion etc are compatible with Final Cut X, and neither are project files written in Final Cut Pro 7.

Final Cut Pro X is a major dumming down of the software, in a similar way to the loss of Quicktime Pro7 functionality when they released Quicktime X. These are not updates or improvements,. They are corporate decisions to dum down softwares in order to give professionals (much) less but sell more copies to amateurs by making them easier to use with a sexier interface. Core functionality has been removed.

Sadly, here is one of the first reviews by a Final Cut Pro 7 user at Apple Insider... It IS NOT GOOD NEWS FOLKS.

Just bought Final Cut Pro X played around with it for a bit and can honestly say this is not a PRO application anymore! Its more like an upgrade to iMovie than final cut pro.

Just to list a few things wrong with it: first and most importantly IT CAN'T IMPORT FCP7 PROJECTS!! That was extremely disappointing, it also wont communicate with motion 4 or color or any of the other pieces of FCP7. Secondly there is no COLOR its gone just gone! It appears they have tried to integrate it directly into FCP but the've failed horribly, there isn't even a 3 way color corrector, and with no support for Davinci files or color files you cant even grade externally. Now there might be a separate COLOR program on the way, but its not here yet.

Apparently Apple asumes that none of the people who use Final Cut Pro own more than one camera because there is no Multicam/Multiclip support. The've integrated two new features as well: Audio Sync and Video Stabilization neither of which work, at all.

Among the problems above are: no chapter markers, no timecode sync, no way to mute audio on any give track, no XML import/export, cant play AVCHD, cant render crossfades real time, no way to edit .psd files (imports as flat image).

I could go on for ages but what it comes down to is that Apple rushed this to the market way to soon, it should have gone through extensive testing by professionals in the industry first. Anyways just had to vent after watching $300 dollars go down the drain.

I really hope Apple listens to all the negative feedback and releases a major update and releases Color as a separate application, but as it stands right now do not buy!