bAnger - the Journey from jamie griffiths on Vimeo.

A five minute dance-comedy featuring a young woman, SHIRLEY,on her way to a job interview, who crashes into a teenage head-banger, IVAN, at a bus stop and accidentally swaps into his body and mind. She takes on his persona, and traverses the city on his way home. As a window and mirror into the complex realities of gender orientation and adolescent identity, 'bANGER: tHe Journey' propels the viewer along on a humorous but thought-provoking ride into explorations of gun fetishism, notions of heroism, and misplaced teenage desire. This short film explores the existence of a woman inside a teenage boy, to ultimately reflect a whole and vulnerable human image. 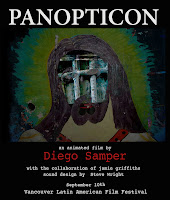 In the Colombian town of Ibagué, a prison for political prisoners was built in the late nineteen century, loosely based on a surveillance architectural design called Panopticon. This dreamlike, surreal animated video was created from the photographic images taken by Diego Samper in 2003, just few days after the buildings was emptied, previous to a complete renovation in order to house a new cultural center. It reveals a rich visual universe of prison art and, through it, aspects of contemporary Colombian social and political reality. But beyond that, it reflects on the principle of freedom. Is the Panopticon imprisoning freedom itself?

jamie and DIego are starting a new film project in the Amazon River Basin in January 2012, title 'Manigua - The Wild Heart of the Big Forest'. More Details

I SEE THE FEAR

'I SEE THE FEAR' from jamie griffiths on Vimeo.

WORLD PREMIERE August 16th 2010, Tinseltown Cinema, Vancouver, BC
A Commission of the Out on Screen Queer History Project

In 2004, visual artists joe average & jamie griffiths entered into a creative therapeutic photography process, to allow joe to explore his experience of living and coping with Lipoatrophy caused by antiretroviral drugs for HIV/AIDS. In joe's 27th year living with HIV/AIDS, this short film, 'I See The Fear' walks the audience into his creative process with friend and photo-collaborator, jamie griffiths. Joe's inner state of mind (poems and diary entries) fuse with digital-photo manipulations to bring home the message that society needs to address the fear & stigmatization at the root of the isolation experienced by the side effects of AIDS medications.