EE’YULLMOUGH’: The Aberthau Mansion is situated close to the site of a former aboriginal village called Ee’yullmough that was located at Jerry's Cove aka Jericho, Vancouver, BC . The village disappeared in the 1880’s, due to the dual effects of a sudden population crash from a smallpox epidemic and a colonising land grab that converted the area to a commercially operated frontier logging camp.

A cedar tree located on the grounds of the mansion is believed to have been on the site during the time of the village – a witness ready to tell its story. (Cedar trees are medicine trees and sacred to the Coast Salish peoples). This tree will become the site-specific focal point of an interactive work consisting of video projections into the tree and accompanying interactive soundscape derived from local ambient sound recordings.

The artists envisage a large group of spirit-beings living in the tree. Each of them is simulated as a semi-autonomous agent with an ability to sense and react to the group as a whole. Although each is structurally and behaviourally simple, complex emergent patterns continuously form and dissipate.
If a viewer approaches the tree, they will trigger the word ‘Ee’Yullmough’ to be drawn together as an aggregation of the energy particles. The aboriginal history of the area is revealed as a single secret word, stored in the life force of the tree. 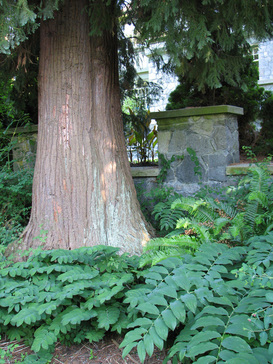