The World in a Shell

An interesting project by German artist, Hans Kalliwoda, that I heard about from Michi Meier, who is taking my Isadora Workshop this week at STEIM in Amsterdam. 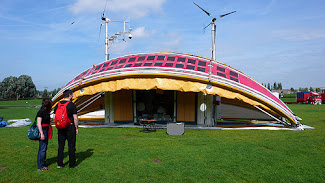 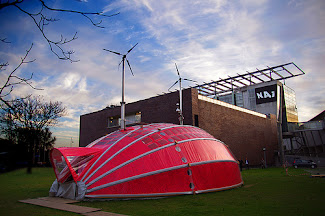 
The World in a Shell is a mobile artist's studio, which functions as an intercultural swap-shop. Being an intervention project by nature it focuses on developments rather than on results. In other words, it's not the arrival; it's the road that matters.

The locations are in areas inhabited by indigenous peoples in the proximity of UNESCO World Heritage Sites where the World in a Shell will function as an interactive communication zone to facilitate a "self-documentation" of the people, cultures, living conditions and the surroundings of these sites, and thus turn into the first living and mobile world heritage site.

The essence of everything that happens, whether experienced, imagined or created in and around the shell, will be captured and stored in a treasure box in the form of 'unica', (pictures, drawings, recordings, stories, self-representations and art works). The treasure box will be shown to the people on the next location and during exhibitions in musea and on biennales.

In such a way the people from one location will travel along to the next and interact with the people over there. At the same time, people from all over the world can connect to the World in a Shell through the internet and follow, or participate, in the project and become themselves part of the world peoples heritage treasure box.